Becoming a finalist for Art On The Move in 2009 opened up a whole new world for me. Before that event, I was an artist but I hadn’t defined myself. My art changed in style, media and even purpose. The image I selected for that entry was of a giraffe ducking to avoid a stoplight. It was that image merged with the placement of the art on a bus that brought focus and has been a driving force in my art since.

My art can be described as a mixture of street and interactive art. Though I have indoor exhibits, I prefer to create public art. The reasoning behind this choice is based on the fact that only ten percent of the population will visit a gallery or museum. By creating public art I can reach the other 90 percent. 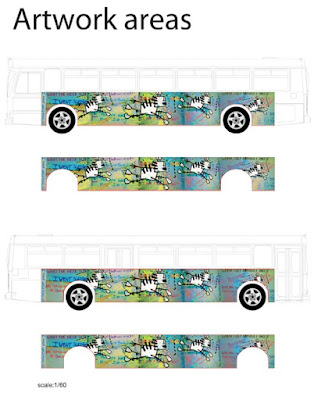 In this design, I incorporated one of my signature characters called a Zonkey. In life, the Zonkey is the offspring of a zebra and a donkey. In art, the zonkey represents the need for two (or more) people to interact and collaborate to create art.

Staying true to this idea, I wanted this design to be a collaboration of not only my work but the work of others. I asked my students at Apex High School to create the background. I gave them a map of Raleigh and asked then to find a street and write a sentence that incorporates the name of the street.

Some examples of their sentences include:

I want world Peace Street.
When I get nervous I Pace Street.
Baby you can drive my Carr Street.


.
Splattered by ian sands
Email ThisBlogThis!Share to TwitterShare to FacebookShare to Pinterest
Tags: art on the move