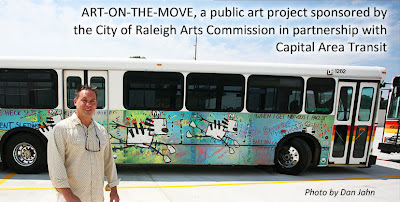 ART-ON-THE-MOVE: a public art project sponsored by the City of Raleigh Arts Commission in partnership with Capital Area Transit (CAT).

One day I saw a call for artists asking for designs for a city bus. I immediately had an image in mind, a fox I had created in pastels that had climbed out on a limb to catch a bigfoot. I would leave the bigfoot out of my first design but it still didn't seem right. For my next attempt I used a watercolor painting of a musk turtle. It looked pretty cool but just didn't have the "look" I was seeking.

About to give up, I rummaged through a stack of illustrations I had created to test out a loose, scribble style I was working on. I came across a drawing of a giraffe ducking out of the way of a streetlight. Just for the fun out it, I scanned the giraffe and streetlight into the bus template. It worked. It won!

For almost three months after it was completed I hadn't seen "my bus". I would get emails and people telling me, "I saw your bus today!" I finally got to see it up close and personal when I was invited down to the bus yard for a photo shoot. 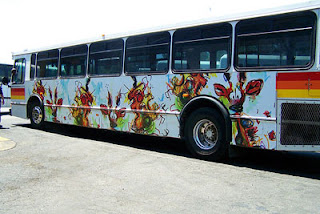 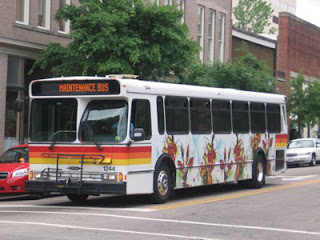 I had an opportunity to create artwork for a second bus. This time I wanted to incorporate ideas from other people. I asked my students at Apex High School to create the background.

I gave them a map of Raleigh and asked then to find a street and write a sentence that incorporates the name of the street.

Some examples of their sentences include:

I want world Peace Street.
When I get nervous I Pace Street.
Baby you can drive my Carr Street. 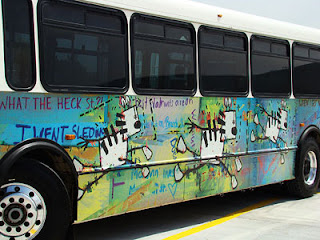 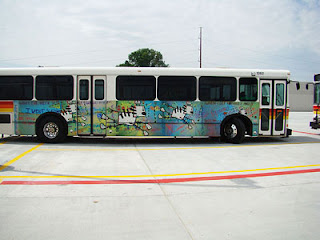 Late last Summer while driving to the beach I started noticing the billboards on the side of i-40. I said to myself, "Self, wouldn't it be cool to paint one of those billboards."

Just for fun, I called a billboard company and asked, "How much?" 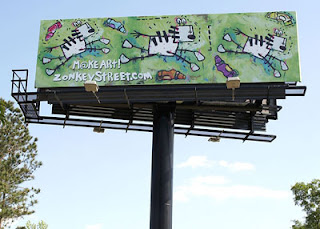 What would you do with 190 art One Students and 1,840 balloons? Make a giant mosaic of the Mona Lisa... silly.

An excerpt from Craig Roland's blog: THE ART TEACHER'S GUIDE TO THE INTERNET


The day began very early on a Friday morning with students arriving individually or in small groups to Ian’s classroom, one of a half dozen or so trailers (referred to as “portables” in Florida) that are lined up behind the school building. While I had some inkling prior to my visit that something “special” was going to happen that day I was not expecting to see the massive project that slowly took shape during the day.

Imagine, if you will, 190 high art students creating a giant mosaic of the Mona Lisa in a school parking lot using over 1,800 balloons and a lot of their own air.
While the use of balloons to create a giant portrait may seem unconventional at first when you hear Ian describe the history and intent of the project in the video below, using balloons in this manner sounds . . . well, pretty traditional. That was one of my big takeaways from the day. 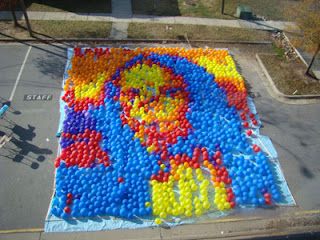 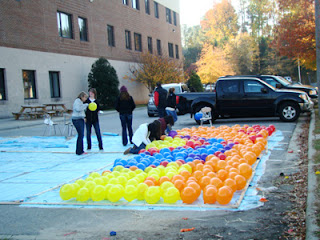 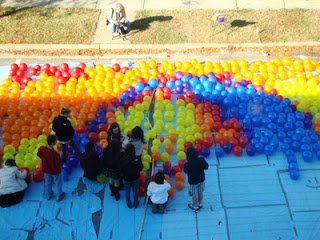 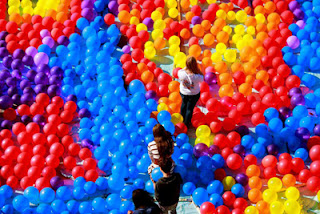