subterranean=underwater.. aka, these would look good in a subway 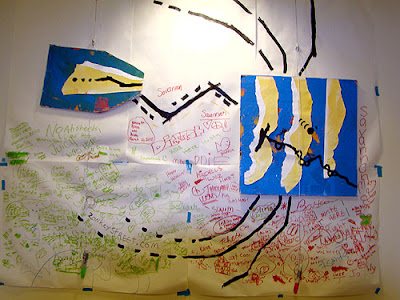 When I walked away from the reception tonight, I was disappointed. I thought perhaps I had missed the mark.

Was this new post it note art the right direction? People liked the old, whimsical critters. Maybe these new pieces were too abstract?

It wasn't till I got home and took a look at these photos that I was able to see that I have not missed my mark. in fact, it became clear to me the direction I need to go. And it's in the interaction.. it's in the writing. These photos reveal a disconnect. The foam board fish and the scribbles of the viewers are almost two separate ideas. I could hang the critters in one room and the blank paper for people to write on in another and there wouldn't be much difference. But there lies the direction. 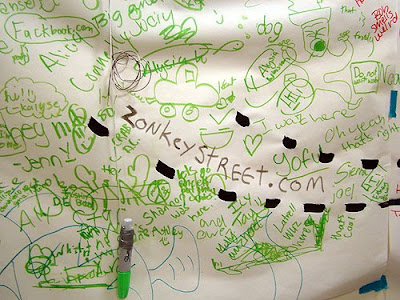 I need to find a way to have the viewer's scribble not just around the work, but inadvertently become part of the work. For example, look back at the first photo. See how the text almost becomes the water the fish is swimming in? This happened inadvertently for both the scribblers and for me.

Next step: how to make it inadvertent only for the scribblers...

so charming and very interesting concept! ;]