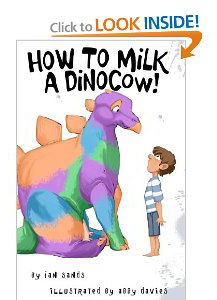 If a freak milk accident that sparks life to a half cow, half stegosaurus isn’t weird enough, imagine how strange it’s going to get when Trip Stanley’s class starts drinking the milk!

Trip Stanley’s best friend Jules spills a glass of creamery milk onto his uncle’s dinosaur machine and activates the contraption. A creature hatches and grows rapidly into a black and white spotted stegosaurus with and an udder. A stegcowsaurus. When the last bottle of creamery milk that Jules had planned to bring to school for show and tell is knocked over, Trip decides to milk the stegcowsaurus.

Everyone in class is given a taste and the reaction causes spots and horns. One classmate even grows a tail. It’s up to Trip to figure out how to de-dinosaur his classmates and keep from getting kicked out of school, all while preventing his mom from discovering the stegcowsaurus in his bedroom.

With angry classmates and an upset teacher in his living room, Trip finds a solution in his own advice, when life give you lemons you make lemonade.

How To Milk A Dinocow Available on Amazon! 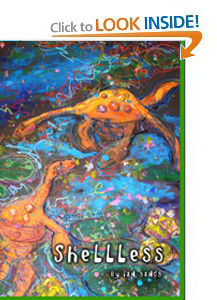 Jirst Bluefin's biggest problem is being ignored. Kacela Middleton is the one person in the world who is never ignored. Jirst is about to discover that sometimes it's better to be ignored for no reason than to become popular over nothing at all. Shellless is the story of Jirst Bluefin the First as he tries to overcome his biggest problem.

Jirst Bluefin is a quirky, loner who spends his afternoons talking to imaginary dinosaurs that swim in a pond. The dinosaurs look like turtles that lost their shells. He calls them the Shellless. After a chance meeting, the intelligent and sophisticated Kacelia Middleton befriends Jirst. Taking note of Jirst's major problem, being ignored, Kacelia encourages him to come out of his shell.

Jirst tries a few funny, yet failed attempts at gaining popularity. Desperate to acquire recognition, Jirst resorts to telling his classmates the tale of his make-believe, dinosaur friends. However, he inadvertently leaves the impression that the Shellless are real. Believing that extinct plesiosaur swim in the pond of the local park give Jirst the boost of popularity he covets. 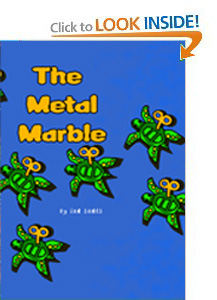 Tucker's Aunt Nyce is his mom's little sister only she isn't that little and she isn't that nice. He has to get used to it though because he's stuck working at her beach restaurant The Crab & Grab for the next two weeks.

While hauling boxes of stinky fish from the dock, Tucker and his 11-year-old cousin Trist discover a golf ball size, transparent metal "marble" floating in the sea. Ignoring the warnings from salty dog Chef, Tucker and Trist leave the marble in the sunshine until it dries. The marble hatches into a half real, half robotic mechanical turtle.

From the moment the marble opens, Aunt Nyce places Tucker in charge of the turtle. He soon realizes the biggest threat comes from his aunt's schemes to use the unique creature to draw customers. 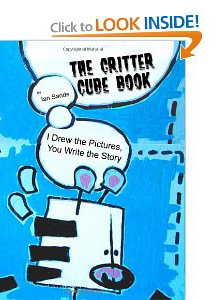 There are three sections of the Critter Cube book. The first section introduces the characters. Since the Critter Cube Book is designed to be interactive, this section allows the reader to decide what characteristics each character will have.

The second part of the book allows the reader to write his or her own story. There are prompts that the reader can use as helpful guides but they will determine the story.

The third section of the book is a flipbook that allows the reader to change not only the story line, but also the characters by simply flipping the pages.

The Critter Cube Book is sponsored by the Graham Johnson Cultural Arts Endowment; a non-profit organization whose purpose is to develop, promote and coordinate the arts and cultural experiences for the community of Wake Forest as well as North Carolina. 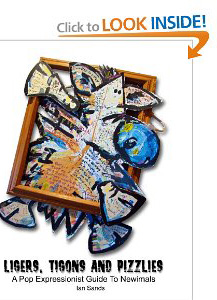 When two different kinds of animals, which are very closely related, create a new life, the baby animal is called a hybrid. For example, if a zebra and a horse have a foal, the yearling is a hybrid called a zorse.

Zorse is a cool name. Hybrid however, is a boring name that sounds more like a way to create electricity by pouring water through a turbine than it does a combination of two living creatures. From now on, I'm going to refer to hybrids as newimals.

Though some are rare, all of the newimals in this book are real.

Oh these look sooo cool! A year later but hey--,I am still gonna check me out! I like the fact you've used the photo from amazon kindle or all version ! We don't have access to a physical "library" so it's thrift store junk or kindle app books ;( But at least theres that! Plus I love finding books already reviewed by other bloggers--THANK you for that!! :D