I started this book about five years ago. After working on it for a week, I stopped myself. This was not my usual, whimsical story. Why was I writing this story?

A year later, I read over what little I had. I liked what i had written and decided to pick it up again. After another week, I had the same experience. This went on for several years.

Finally last year, I was having a discussion about National Write a Novel in a Month with a student. She encouraged me to take part in NaNoWriMo again as I had in the past. I told her I couldn't start something new since I still had stories I hadn't finished. She was persistent so I made a promise to finish Crushing Turtles. It then took me another year to actually post it. So here we are.

Below, are short, excerpts from a few chapters in the story. 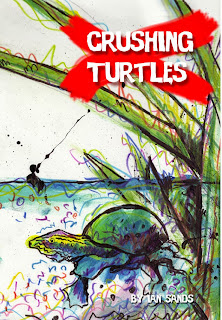 Two:
Nick likes Tori. He brings her turtles. Tori
likes Nick. He reminds her of her little brother.
Tori never crushes turtles in front of Nick.
“It would corrupt your soul,” She says.
Nick isn’t sure what a soul is or what
corrupt means, he just knows it sounds bad.

Nine:
The older boy’s rod bends. He reels in his
line and pulls up a sunfish. It flops around on the
dock. The older boy takes a knife from his tackle
box. He steps on the fish to hold it still and cuts
off its head.
“Stupid sunny.” Says the boy. He flicks the
knife sending the two pieces of fish into the lake.
“Turtle food.”
Nick watches the fish head sink.

Ten:
Nick kicks the sheet off his feet and
uncovers his toes. He thinks about fish heads. He
wonders if cutting a fish in half in front of him
corrupted his soul. But he doesn’t know what
corrupt means.
“What’s a soul?” asks Nick.
“It’s the part of you that doesn’t die.” says
Tori.
Nick looks at his toes and wonders if one of
them is his soul.
“Which part?”
“Inside you. Like, inside your heart.”
Splattered by ian sands
Email ThisBlogThis!Share to TwitterShare to FacebookShare to Pinterest
Tags: children's book, Children's Literature, writing