Now
As the holiday tradition dictates
brought to you by the
Society of Moose Against Using Reindeer
(S.M.A.U.R.)
I submit to you...
A Moosifesto
For hundreds of years Santa Clause has been delivering toys to children around the world. Though he is not beyond using outside assistance, Santa has been able to distribute presents on Christmas Eve without the help of FedEx, UPS or the United States Postal System. His primary mode of transportation has been a sleigh driven by an original team of eight tiny reindeer with the occasional help from a mutant red-nosed deer, and a misguided or perhaps delusional dog. 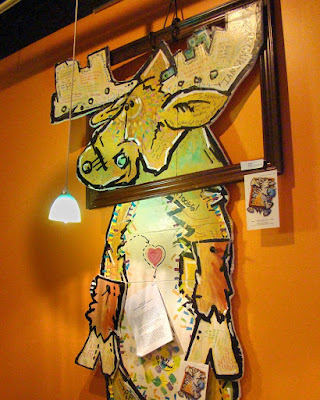 As members of SMAUR, we now provide the following reasons for the immediate elimination of the use of reindeer and the prompt replacement by flying moose.

1. More Torque:
Pound for pound, moose produce massive amounts more torque than reindeer. Where horsepower, or in this case reindeerpower, is needed for speed, torque is the ability to overcome resistance. Though it is true that speed is necessary to circle the globe in one night, it is the initial ability to pull the sleigh, weighted down by a ginormous amount of toys and often hindered by heavy, laden snow, which is needed before horsepower can even be applied.

2. Ease of Spelling:
Riendeer? Reindear? Raindeer? “I” before “E” except after “C” and sometimes “Y”? Isn’t rein spelled r-a-i-n? And deer spelled d-e-a-r? Let’s face it. Without a spell checker, reindeer is just too hard to spell! Moose on the other hand is simple. Only five letters and no confusing vowel arrangements.

3. American Made:
Moose are born and bred and raised in the good old US of A! Hiring moose to pull Santa’s sleigh is not only good for America, it’s our patriotic duty. Imports, such as reindeer, are manufactured abroad in such un-American places as Northern Europe and even Russia! Look for the “Born in Maine” label next time you consider hiring your sleigh team.

4. Better Night Vision:
All it takes is one foggy Christmas Eve and Santa can be shut down in a heart beat. An entire year’s worth of elf work, down the drain all because of low hanging cloud vapor. The issue, poor eye sight on the part of reindeer. This is more than a threat as it almost happened Christmas Eve 1964. Thankfully, the travesty was narrowly averted after a red fog light was attached to the nose of Prancer. Prancer was later said to have been so humility by the event that he and Cupid fabricated a tale of a red-nose reindeer that saved the day. These so called “close calls” can easily be prevented through the intervention of a deer removable, keen-eyed moose replacement task force.

5. No More Reindeer Games:
Reindeer are generally poor-spirited creatures that tend to weed out the vulnerable in the herd and deliberately poke fun of them till, tired and weak, they leave the comfort and safety of the compound. Many times the stronger of the deers will laugh and call the weaker reindeer names. On some occasions there have even been reports of the more feeble reindeers not being allowed to play any reindeer games.
Moose have a motto. No moose is left behind.

Conclusion:
We believe every effort should be made to, and a call for, a cease and desist order to be implemented, for all reindeer regarding any attempts to fly, pull, or be in connection or association with, Santa, the elves, toy delivery or Christmas in any way, shape, form or means.

Furthermore, SMAUR is advocating for the establishment of the Meese Labs where moose and geese can be cross pollinated to form a new species of flying moose (code name: meese). Meese will merge the flight path navigational abilities of the Canadian goose with the strength, torque and American brand name that we have all come to respect and love, of the moose.