Two years ago, while taking a vacation on Bald Head Island, I started a chapter book titled Crushing Turtles. This book was something much different then anything I had written before. A strange title, a strange subject matter and a little dark. I liked the characters right away, especially their voice. Of all the  parts of writing, voice has always been my favorite part. In fact, it was probably the character's voice that originally masked the dark storyline I was writing. 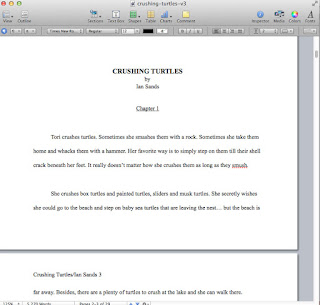 Not long after starting the story, I stopped. I thought to myself, "Self, this isn't the type of thing you write." I was right of course. All of my previous chapter books had been whimsical. The topics were playful and the characters, though witty and perhaps charming, didn't discuss anything too deep.

Since that time, I tried my hand at writing several other books. Two failed attempts at writing art history books. Another incomplete chapter book and even an incomplete romance novel (though I still have it in my heart to finish that some day.)

It wasn't until I saw a tweet about NanoWritMo that I decided to pick up where I had left off. Even though it was deep or dark or whatever, I just wanted to see where the characters would take the story. I revised the old plot outline and began writing.

I wrote a lot in November but it soon became clear that I would not finish this book by the end of the month. December rolled around. I had a decision to make. Shelf this book for another year or push through. I continued writing.

Chapters took forever. Where I had previously raced through a chapter in one seating, now took four or five nights just to write a few sentences.

Then, the night before last I made a break though. I realized I had just written the second to last chapter. The most important chapter. The chapter that brings the story to it's ultimate climax. The rest was easy.

So tonight I put the finishing words on a 5,000+ word chapter book that has taken me two years to write.  That might seem a less than heroic accomplishment to brag about....

Now for the revision process...

I'm so glad you did - you are such a gifted writer!