Ten years ago, my wife decided my daughter would enjoy figure skating. Every Saturday I would take her to the rink for lessons. The figure skaters practiced in the center of the rink and I was able to skate around.

I really enjoyed skating. My daughter didn’t. When she decided she didn’t want to skate anymore I decided to take a learn to play hockey class (it was either that or become a figure skater ... I’m not that graceful).

It didn’t take but a few lesson for me to realize that I didn’t much like playing hockey. Taking slap shots hurt my elbow and my stick handling ability wasn’t so great either. However, I really liked the smell of the ice. I also realized I was pretty good at getting in front of the puck. I decided to be the goalie.

I bought all my equipment used on eBay (all but the cup which I purchased brand new). My skates cost 50 bucks and I got an old, old pair of leather Koho goalie pads. They were horribly heavy, especially when wet.  I signed up to join a league and got a call about a brand new team that needed a goalie. The Jackals.

The Jackals won their first game. We lost every game after that for a few seasons. We would get our heads handed to us. I remember one game I took over 60 shots on goal! We only play for 60 minutes. you do the math...

However, the guys on that team were great. Sure, we wanted to win but we were out to have fun. Over the years I’ve played against, and subbed for, lots of other teams. I’ve been in the locker room after a loosing game and heard team members rip each other apart over the loss. The Jackals were never like that. We were a great team despite losing. 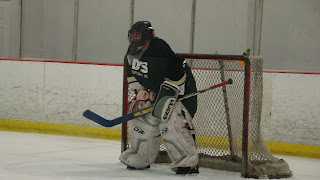 I think it was because of this very fact that the Jackals losing streaks eventually faded away. Then. in 2007, for the second time in three seasons, the Jackals won the FAHL C Division Championship. I have the t-shirt and hat to prove it :) That season my captain got a call from Mike Stangler at 850 the Buzz informing him that the Jackals were the first team to win the Miller Lite Team of the Month.

On Wednesday, April 30th, 2008 at 10:15 PM the Jackals took the ice for the last time. After three ice rinks and two championship wins, the Jackals hung up their skates.

Not ready to hang up my goalie pads, I called the Rec Zone and learned there was a team that needed a goalie. The team paid for the goalie to play. In my eyes,  not having to pay to play is like getting paid to play. That made me semi professional :) So I took the semi professional position as the starting goalie for DTS which later was renamed the BobSleds.

The BobSleds weren’t much better than Jackals but again I was teamed up with a great group of guys. The captain was much more interested in making sure the players were all a good fit for the team than he was worrying if they could shoot or not. This same philosophy worked in the BobSleds favor as we also won a championship.

Over the years I’ve had some great hockey experiences. I was at game seven when the Carolina Hurricanes won the Stanley Cup. I had the opportunity to sit in the Hurricanes locker room and meet some of the players. I even played goalie in RBC, in the same net and rink where the NHL has all their NC games.

So after ten years of playing more than 800 games and probably stopping over 20,000 pucks, I’ve decided to retire. In fact, tonight, December 15, 2012, will be my last game. To all the players, team members, refs and zamboni drivers, Thank you!